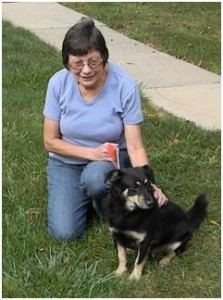 Sue Hagerman, Certified Dog Trainer graduate of Animal Behavior College and owner of Pet Dog Sit-uations, LLC, in Maumee, Ohio, sent me a story about a dog named Sophie that she fostered and rehabilitated. Sue volunteers at local shelters working with dogs that need socialization and basic training.

I think “Sophie’s Story” is the essence of what helps dog trainers get through the rough times, the difficult clients and the disappointments that sometimes come with working with dogs. The moments when a trainer sees what a difference they’ve made in the life of a dog or their owners I believe is what keeps us going. Sue’s work with Sophie was truly admirable in my mind!

Sophie was about 3 months old when she came to the shelter with 3 siblings.  A small, fine-boned, long legged, long neck, Lab mix pup that I believed to be part Italian Greyhound. The three were soon adopted, but Sophie grew to be more afraid, timid, and I heard someone say that she “refused to cooperate,” was uncontrollable, so she was put in a quarantine area until “she learned to obey.” An anti-depression/calming  drug was also prescribed.

I thought she had been adopted until the autumn I went to the shelter and she was outdoors. Terrified of everything from people, traffic noises, other dogs barking, she would try to run away, shivering and tail tucked under. The Thunder Shirt didn’t seem to help much. She was now about 1 year old and her time at the shelter was about to “end.”

I asked if I could foster and try working with her in a quieter environment, and spent time with her every day for a week until she went home with me.

She ignored me most of the time and there was little if any eye contact the first few days. Gradually I would say her name, turn her head toward me and give her a treat. She even wagged her tail slightly when I told her “good.” I let her have a few days to calm and get used to her new surroundings then we went to work. While walking outside she would spin and try running to escape strangers and noises. Indoor noises like TV, phone, doors, drawers opening and closing, plastic bags, and dropping items on floor sent her running to the crate. So many things she had to get used to: brooms, sweeper, empty boxes, walking around and under tables and chairs, a rocker, someone knocking at the door, lawn mowers (oh my!).

I told the shelter manager I wanted to try a grain free food and she agreed.  What a difference!  She was noticeably calmer in just a few days and soon would walk outdoors near traffic without the Thunder Shirt.  We enrolled in an obedience class and despite a few obstacles, she passed.

When I returned her to the shelter 3 months later the staff immediately noticed the increased eye contact, wagging tail, calmness and response to cues.

Sophie was adopted before Christmas and her new Mom says she is “just super.”

Webinars for Sale
Click here to Find Out More