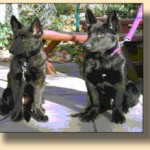 Since the early 1900’s, German Shepherd Dogs have been popular in America. Max von Stephanitz, a wealthy German nobleman, created the breed while attempting to produce a dog breed capable of herding as well as guarding the flock in times of need. While the dog’s coat is suitable for all weather conditions, its size and seemingly effortless movement indicates strength and speed. Shepherds have many color variations. Acceptable colors are black and brown, black and red, gray, black or red sable and solid black. Adult males generally weigh between 75 to 95 pounds and adult females typically weigh 55 to 70 pounds. The gait, which describes movement, is called the flying trot. The German shepherd is supposed to have a far front reach as well as great rear end extension. This produces a dog that glides across the ground, covering a large area in few moves, which is the right movement for a dog keeping a flock of sheep together. In fact, the whole visual picture illustrates the qualities necessary to do their intended work. Large, strong and fast might simply state the breed’s physical attributes.

Perception of vulnerability and the willingness to comply are two essential traits for working German Shepherd Dogs. Perception of vulnerability requires the dog to be sensitive to the harmless. Based on this behavioral trait, a good German Shepherd Dog would never hurt a child, baby lamb or kitten. Willingness to comply is necessary in order for a dog to work for man. In the end, von Stephanitz produced a breed type that suited the Sheep rancher well. Imagine having a dog that is willing to obey your every command, play with your children and guard your home. Sounds like a dream; von Stephanitz struggled to produce it and did.

There are more German Shepherd Dogs registered to the German Shepherd Dog Club of Germany then all breeds combined in the American Kennel Club registry. This can be attributed to this breed’s ability to do just about any job available. Von Stephanitz concerned himself with the behaviors first and foremost. He said, “German shepherd breeding is service dog breeding”.

A temperament test was developed to test the scent ability, obedience capability and courage to defend its owner. Dogs that passed these tests were considered worthy of breeding. This test came to be known as Schutzhund.  Schutzhund is utilized today as a competition sport as well as a parameter to judge a dog’s character. Working breeds such as the Rottweiler and Doberman are also seen at Schutzhund training clubs and competitions. One major point here is that form must follow function when addressing working dog breeds. Nervous, skittish, aggressive dogs would never be bred if we followed von Stephanitz breeding guidelines because they could never fulfill our job requirements. Good looks, correct size and snazzy colors don’t make a working dog. Good character, including sound nerves, social balance, handler sensitivity and courage, make working dogs. Police dogs, search and rescue dogs, scent discrimination and Seeing Eye dogs are carefully bred based on behavioral traits.

German Shepherd bloodlines are an interesting topic in which I will forever be a student. Working bloodlines versus show bloodlines have been an on-going internal conflict among breeders and probably will be forever. Conformation (body type) is drastically different between the various types of bloodlines which includes American bred dogs, West German show lines, West German working lines, East German show, East German Working, Czech. Working bloodlines, Dutch and so on. German shepherds of the show line variety are generally more angulated than those of the working bloodlines. Anyone interested in the breed should do an ample amount of research before actually bringing one home. There is a wealth of information on this breed of dog and when a family is considering a dog as a pet, it is important to understand the unique and different behaviors that are present in the various bloodlines. Since many of the bloodlines originate from European countries research can be a bit difficult. However, it’s fun looking in to it and learning the names of some of the foundation dogs of the past and wondering if your dog may behave in the ways of his grandfather. My personal advice is when looking for a German shepherd, always look for the “von Stephanitz” version, forget its looks and remember it’s the strength, sensitivity and willingness of the dog that will solidify the existence of your relationship and make you never want to be without a German shepherd.

The description of the German Shepherd Dog within the perfect standard is more than wonderful but trying to find a real live dog that behaves as indicated will be challenging. Good luck! Unfortunately, this breed has suffered dearly as a result of its overwhelming popularity. Character problems run amuck in many of our current breeding lines. Many Shepherds are fearful, shy, sharp and aggressive, barking and lunging at strangers and other dogs. These nerve bags make the whole breed look bad. Physically, there are a whole host of possible chronic ailments to plague your dog throughout its life including orthopedic problems, neurological issues, gastrointestinal sensitivity and skin allergies. The German shepherd may be a challenging breed to consider given all the information. If you find a healthy and correct German Shepherd Dog, you will be stunned by the intelligence and sheer magnificence of your dog. It has been said that a German shepherd is as bright as a ten-year-old child. Think Rin Tin Tin. But if you get an unsound pup, oh boy, you’re in for it. I will admit that I have personally taken this risk many times acquiring both types over the years, so I have experienced the gamut and will continue to do so.

I began writing about the German Shepherd Dog in this issue’s Pet Gazette because of the number of these dogs frequently seen by millions of people. Today, there are dozens of German shepherd heroes working in New York City and Westchester to help us recover from the World Trade Center disaster and protect us from further harm. These dogs will work till they drop and do so with amazing focus and concentration making the German shepherd dog a truly amazing breed.

Webinars for Sale
Click here to Find Out More